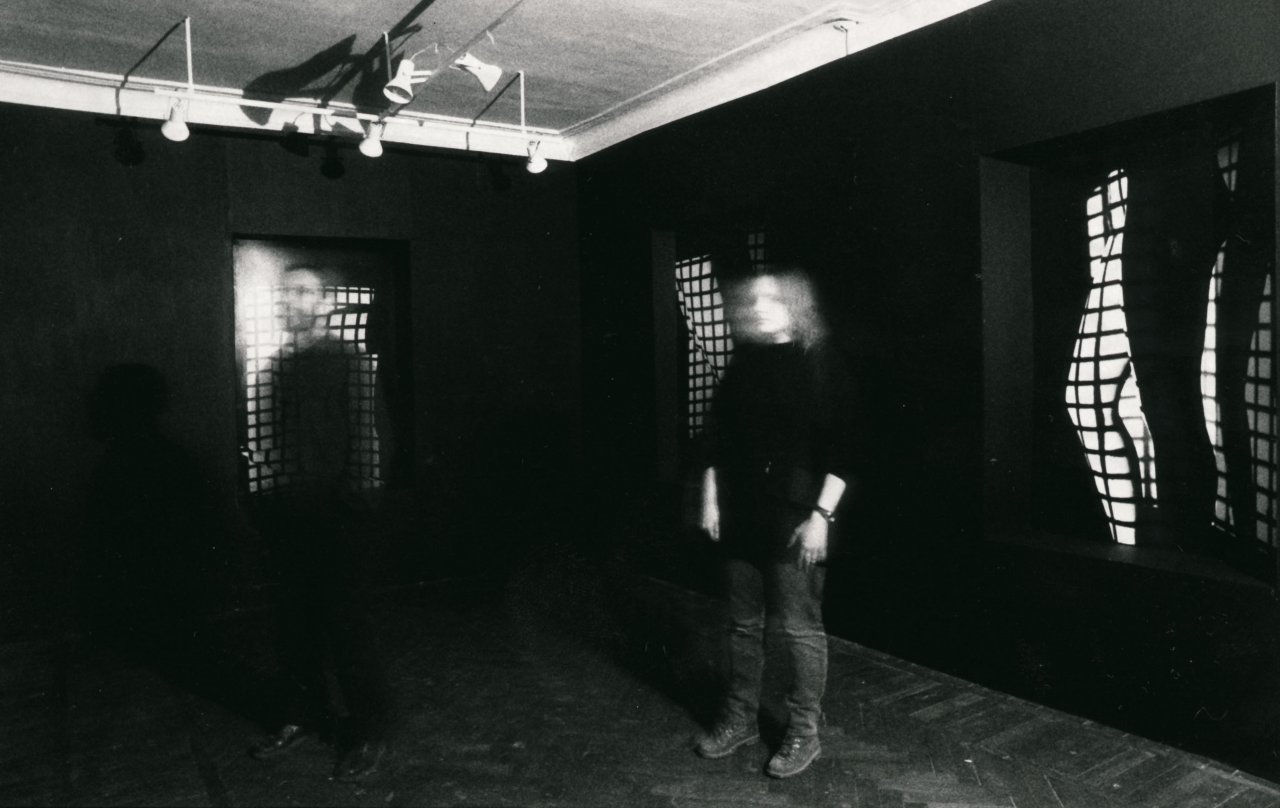 The projection mechanism is so natural for a human mind, one wouldn’t practically notice that any human activity, be it physical, creative or social, is a result of projection of the previous life experience. The stimulating moment that initiates in this case associations or reminiscences, could be a sound, a word, a scent, a touch, a feeling or a sensation... I would compare it to a black box, with perceptions and emotions at input and the result projected by Inner unconscious work as an output.

The PROJECTION project is somehow based on my childhood memories. Memory recalls emotional experiences and forgotten moments of the past. Among them – an album of Vasarely that stood at dad’s bookshelf. Geometrical motifs of the project's three parts is a kind of projection of my reminiscences about the artist's work. Through this project I'm trying to make up a black box where the moment of projection is already realised in displayed photographs. At the same time a viewer inside the installation unwillingly becomes a part of the spontaneous projection process.

After graduating from the college where I studied photography, I’ve understood that a common opinion that photography deals with reality, is basically wrong. It’s rather simple to realise that photography doesn’t reflect reality. Even if there are no people within the frame – and people usually notice someone's trying to photograph them – the photographer himself always chooses the shooting point and projects his own vision of what he wants to see. Photography always turns to be production, even in reportage. That’s why I’ve chosen production photography, where form end to end I'm the author of everything I get (including shooting and printing failures). For me it’s easier to imagine the draft of the future picture and then to embody it by all means. In other words, I project the picture created in my imagination to photography.

1994-95 season could possibly leave its trace in Moscow art history as the time of restarted interest to the problems of body. Every new show widens variations: Alexander Brener’s direct work with his own body as an instrument of construction of the new discourse; hypertrophied sensuality of aesthetic and philosophical studies of «Body Space» by AES group; Oleg Kulik’s new zoo-political mythology; Lyudmila Gorlova’s studies of «repressing» birth trauma in child's unconscious with art and so on. Different by contents, these interpretations of the problem anyway have a «national» character, i.e. anthropomorphous specific of Russian mentality and traditional inclination to psychology which is now equivalent to dealing with unconscious.

«PROJECTION» by Tatyana Lieberman whose priorities are seemingly found in absolutely different sphere (that is reestablishing of the lost formalistic tradition of Russian photography, and moving on along the path beaten by Vasarely & C°), is interesting for XL Gallery not as for these purposes but rather because of the above mentioned national features. The surface of anonymous human body which «carries on» aestheticising illusions of opt-art, is filled, in local context, with interminable anthropomorphity and psychologism despite of all laws of distraction. Locating the four enlarged photographs in the black box sets a stylish puzzle for a psychoanalyst; clear exposition hides the indissoluble mix of «daddy’s album» of Vasarely, frustrated sensuality, history of meaningful sounds, scents and experiences, and also a conscious desire to take this indivisible block out of unconscious stopping at the edge where starts final «confession» and deliverance of personal phobias/pathologies though the art ends.

The "shadow" photography by Tatiana Lieberman

Considering the previous XL Gallery's exhibition, the chosen project by Tatyana Lieberman seems a bit strange at first glance. The gallery is well known for it's interest to radical, provocative or uncultivated projects; what then could drive its attention to these photographs – rather traditional, somehow banal and lacking the «author's» style? By every indication Lieberman's compositions should have belonged to the photo mainstream that goes somewhere between salon and commercial or journalistic and «reportage» trend on the one hand, and that, on the other hand, doesn't turn into purely auxiliary and secondary media, thus preserving the signs of photography as such. They should have if only we had such a mainstream in this country. It's a paradox that natural formalism based on aesthetic prerequisites and laws of photography seems now a bizarre marginality and a larger extremism than all other obviously experimental strategies in photography or appropriation of photography. On some private condition, photography is given a «pass» to the «big» and contemporary art if only it has some ideal contents besides or even instead of basically photographic values - be it a grotesque technique, the problem of authorship or a «conceptual» approach to photography in general. Our photographers/artists seem to be shy making just photography.

So defining Lieberman's work as traditionalist ones would be rather conditional; one might note the closest precedent of her optical aberrations; in Russian art it's «A Girl with "Leica"» by Rodchenko, delineated with a falling shadow. The very theme of likening human body to graphical or geometric pattern has been very popular in world photography in the 20’ies; this popularity had its roots in both the interest to the «man-machine» problem and the invention of the new photographic language that liberated photography from the classic painting's stereotypes. Obviously, projection of patterns onto women's body by Tatyana Lieberman doesn't have such a direct and fresh origin. She accepts this idea as steady and well-developed method, which is wasted so much it could be filled with something else. But what exactly – refined and somewhat decadent eroticism, opt-artistic automation, contemporary fashion's allusion of tattoos or some other «else» – should the viewers decide themselves.