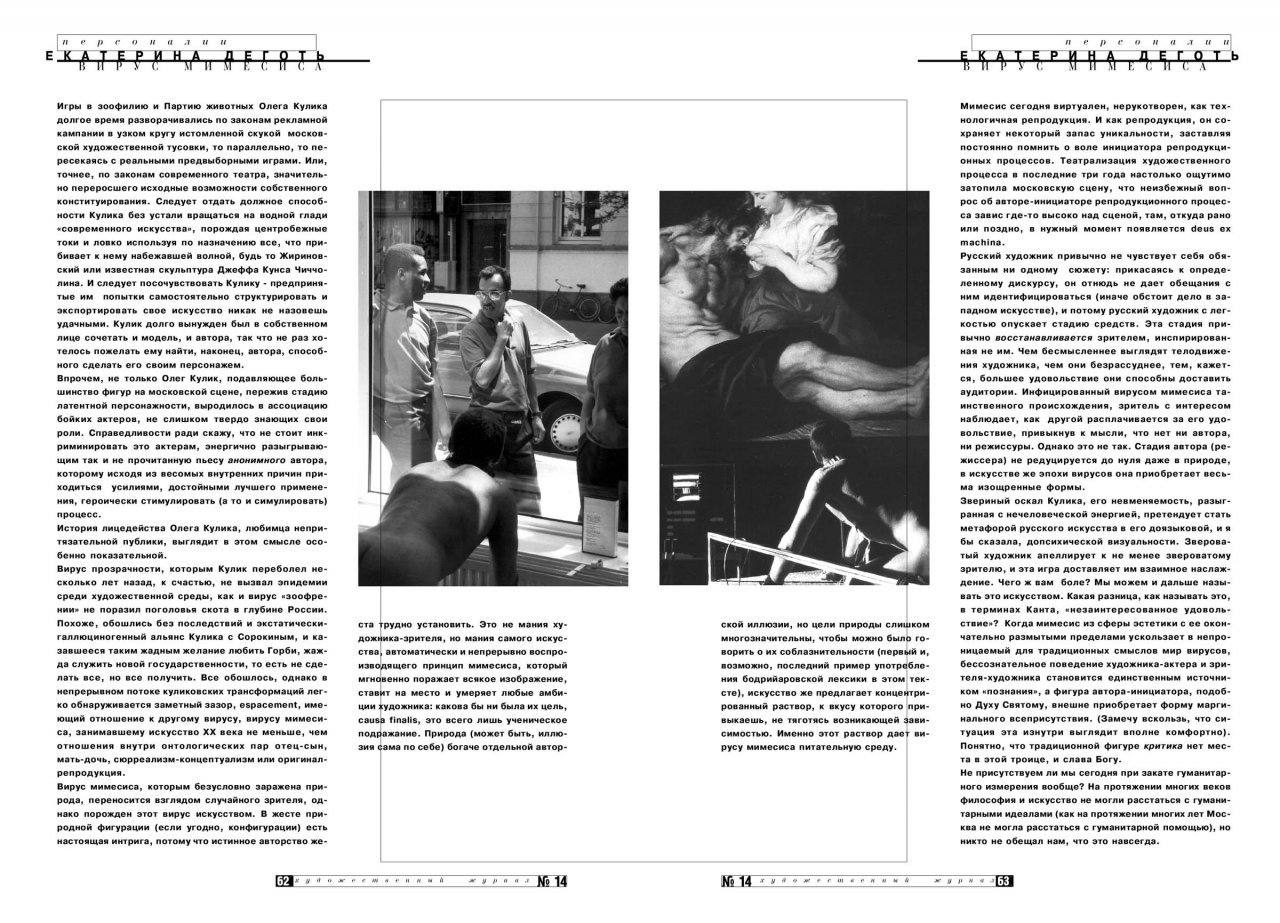 What did the artist want to say

Trying to recall Moscow art life of the past three years I found myself amazed with the fact that the visual has absolutely defeated the textual. That's true about both exhibits and performances. Text has submitted to installation or action, being suppressed to marginality. Traditionally important for Moscow art scene, the text is alienated from the object of commentary. Sometimes having no catalog leaves one bewildered about what's been shown, and -- on the contrary -- a catalog might give an exhibit more serious status.

Meanwhile an artist's fame depends in many ways on the press. The more reviews the more sterling an artist feels himself. There are even some press harvesters, who, like film directors, make the text being written by others hands.

Oleg Kulik is an example. Practically all Moscow critics and almost every media publication have mentioned him. That's why there are two Kuliks: the real and the virtual, or to be more precise there's one artist Kulik and many textual Kuliks, fancy interpretations with pictures.

In this project Lyudmila Bredikhina is solving  several problems with one stroke: she restores the text from a submissive position into an object of the exhibit; she makes creators of virtual Kulik subjects of the exhibit; and she mimics their texts. Let's leave judgment of imitation's adequacy to viewers. And let's think about ways of creation of the primary artist's image, about individualities that created that image; especially having a video (of a national family talk-show) that gives a good chance to see yet another interpretation created right on the screen, to estimate where and how might the hypothetical text, directed by the artist, develop.

This project is indescrete just because of its humanistic pathos, enlightening ideals and also love to the purity of genre.

On humanistic pathos. Life's short, but no history in the world -- let it be even a history of culture -- may last longer than human life; there's no other measure for it. Thus deserved glory and immortality should be taken easy, joyfully and every day. What makes an artist a symbol of time, a living classic an stuff like that? The number of lines in the press, both mass and specialized. The truth is out there.

On enlightening ideals. The text is dying. We can't but abide by the circumstances: the text being demolished by the screen, intertext being chopped into files, and the author has been dead long before. Anybody can privatize culture through the screen now, create one's own directories and fill them with one's own messages and pictures. To become eternal literature text has to be screenplayed, to become a show.

On love to the genre. The genre of literature mystification, being abandoned for almost the whole XX century -- and therefore having preserved its purity -- seems to me ideal as the first step in the text's global challenge to get a place on screen. It has freedom, intrigue and positive practicality. Unlimited are the ways of mystification in the mass media world. There's a promising perspective to worm into computer networks. And the problem of resolution today is just a technical issue. 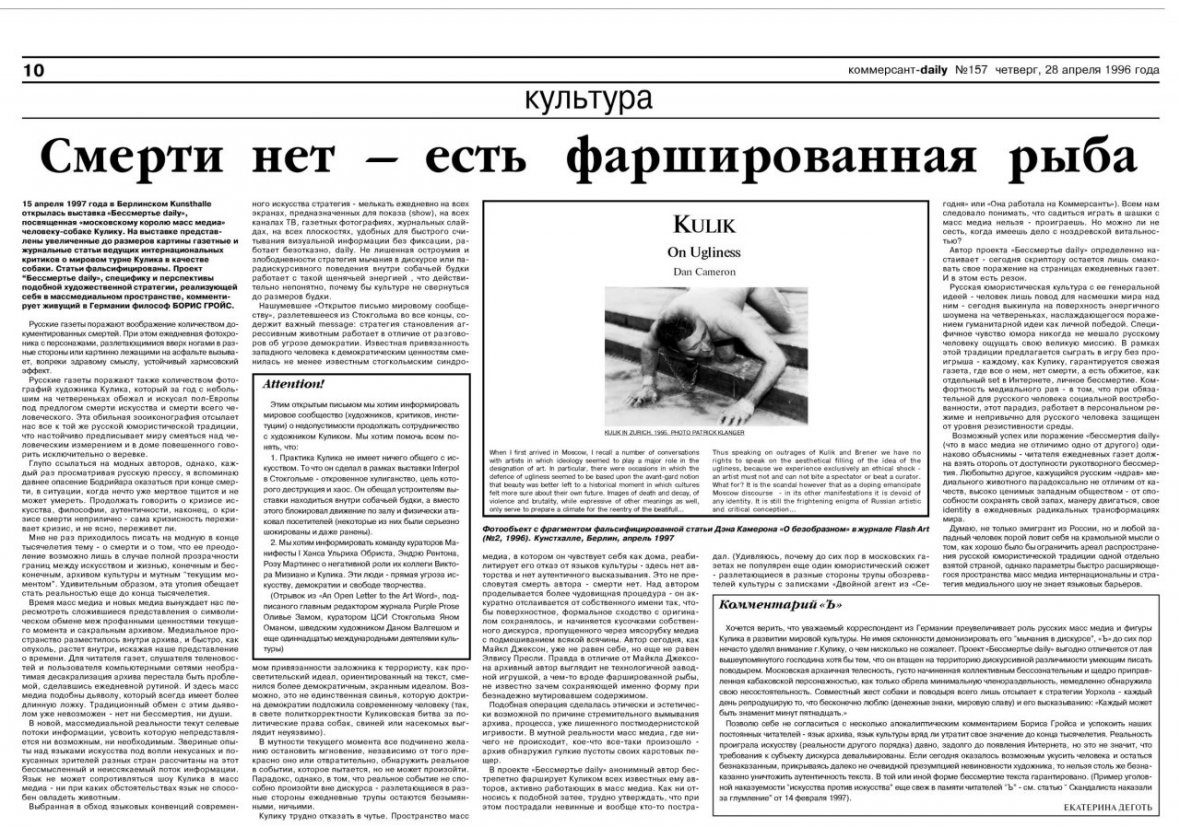 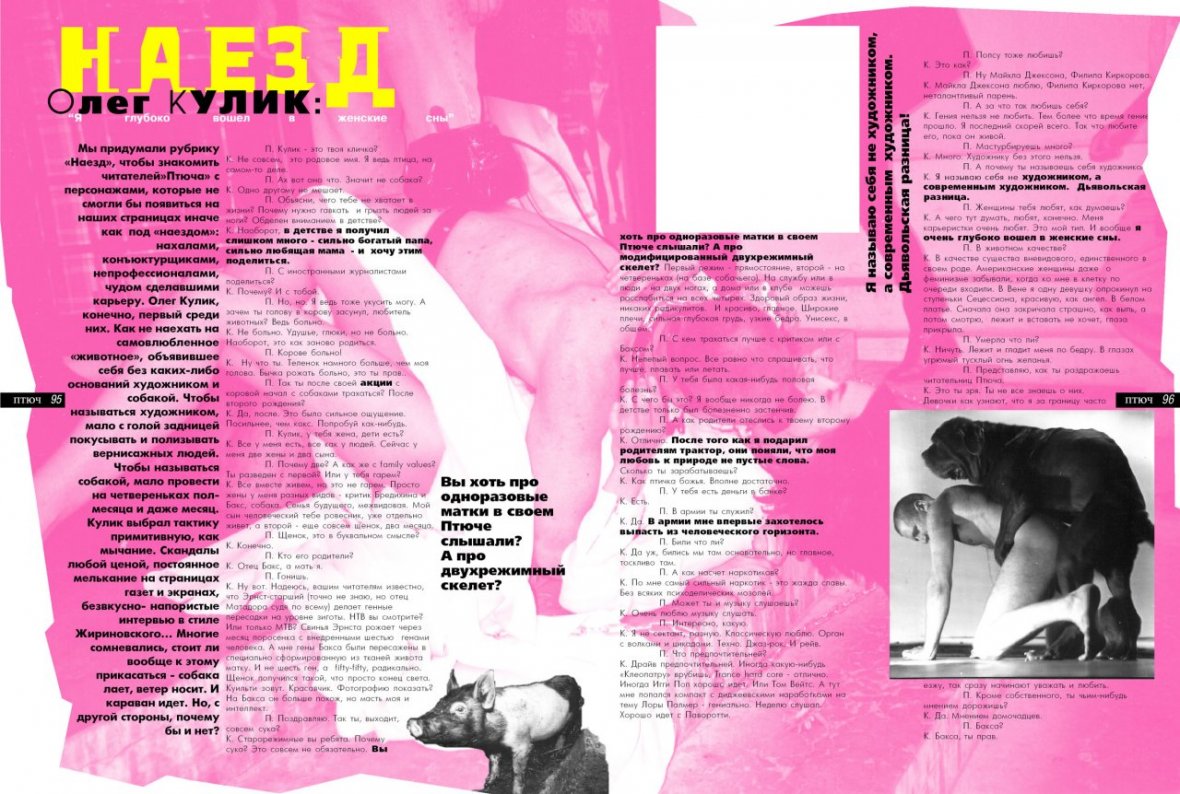 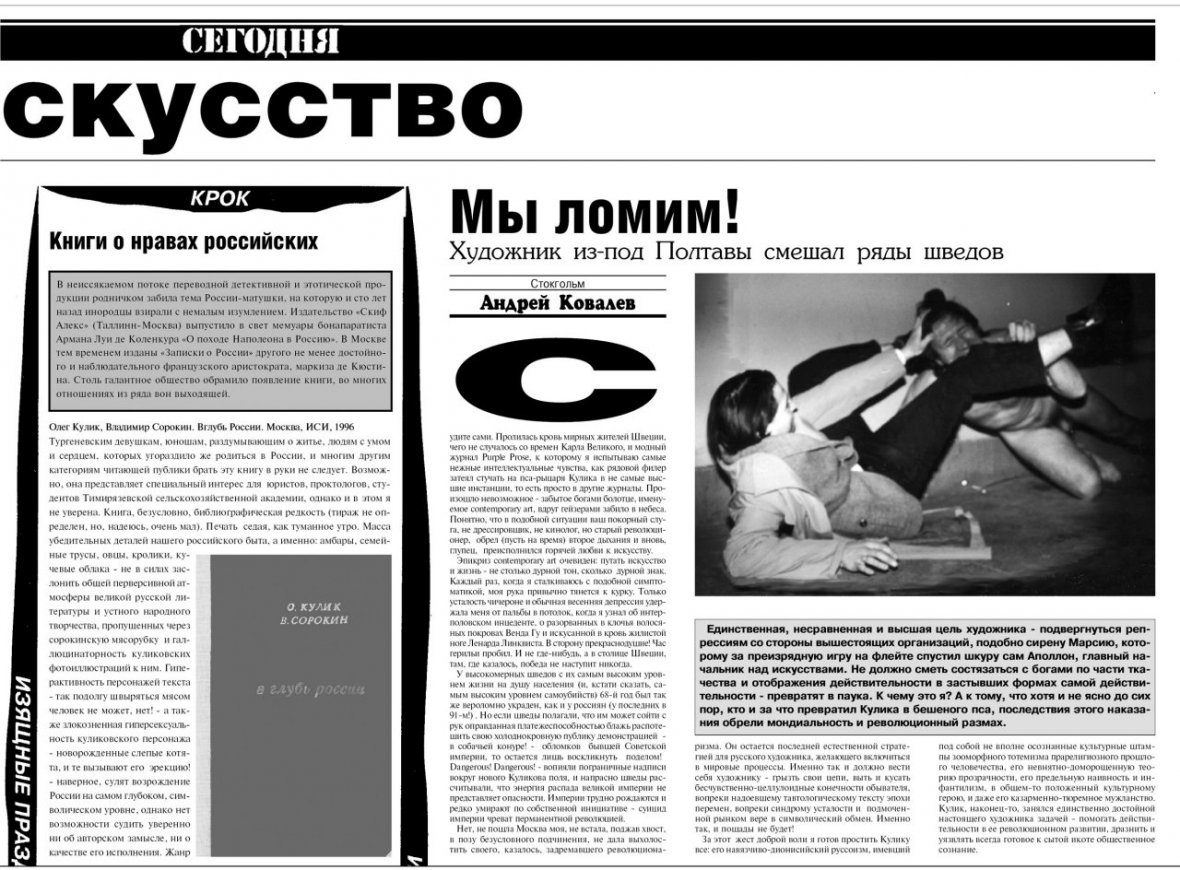 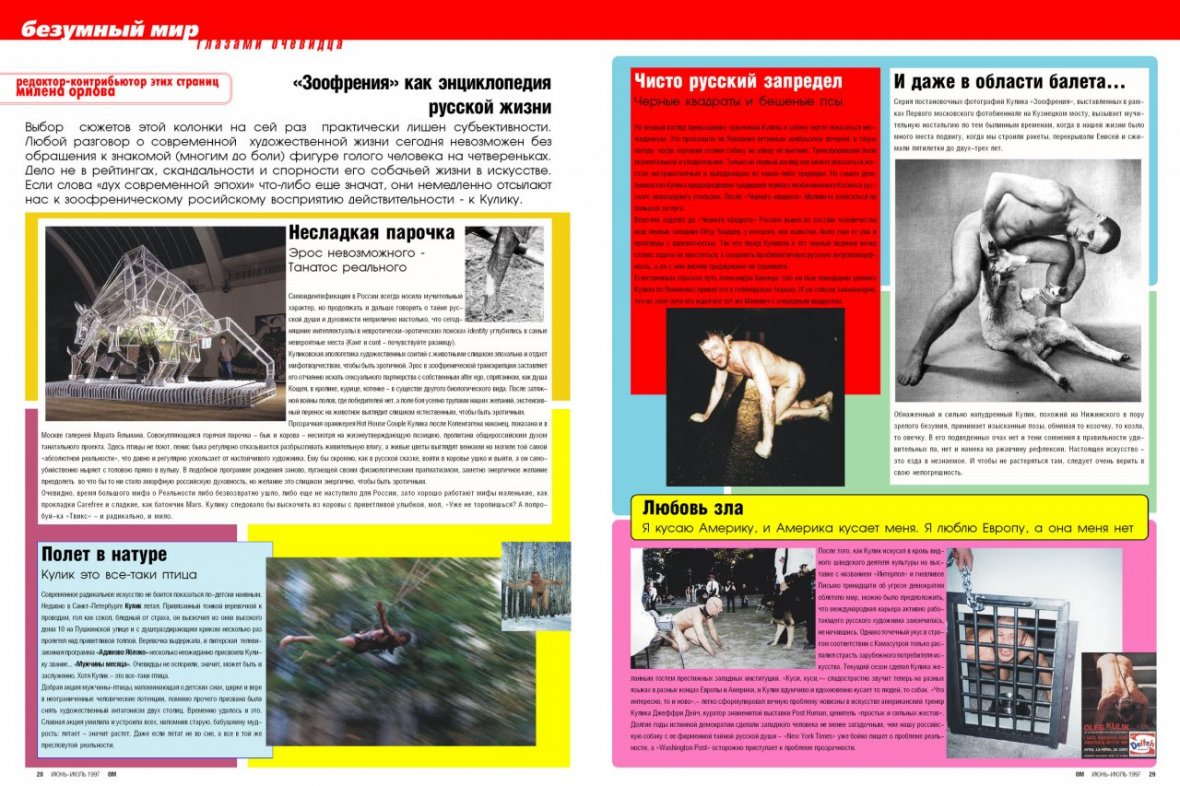 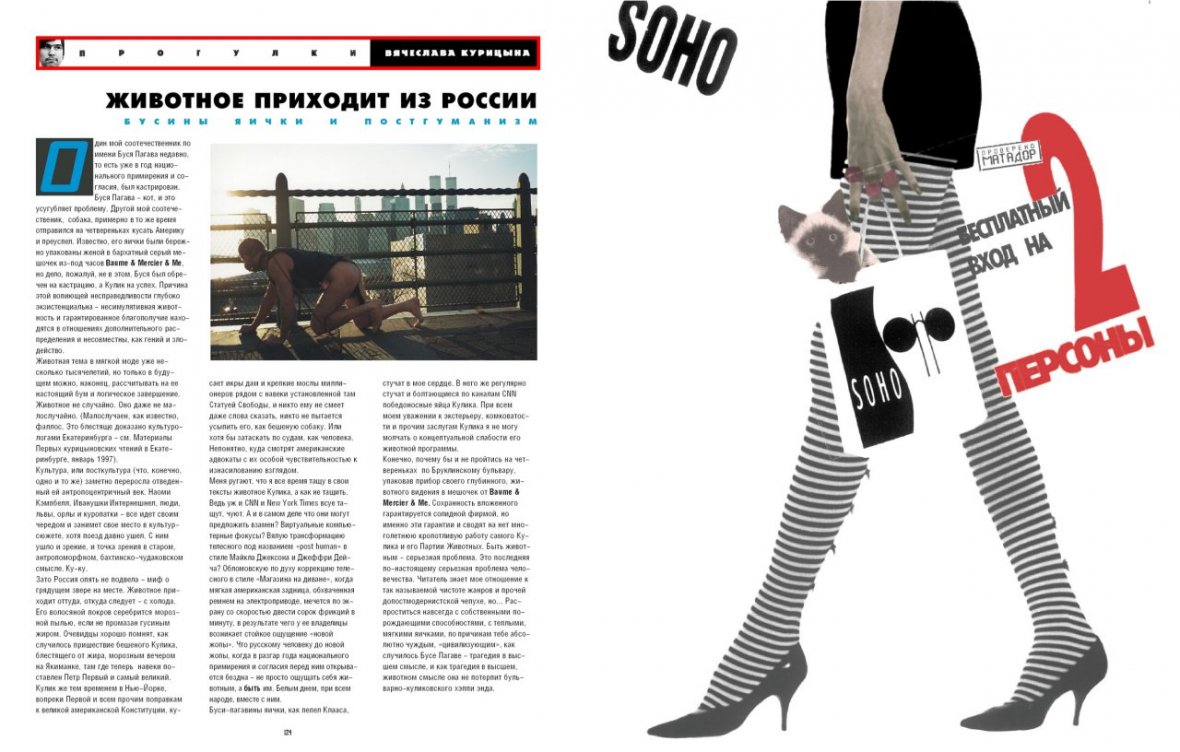