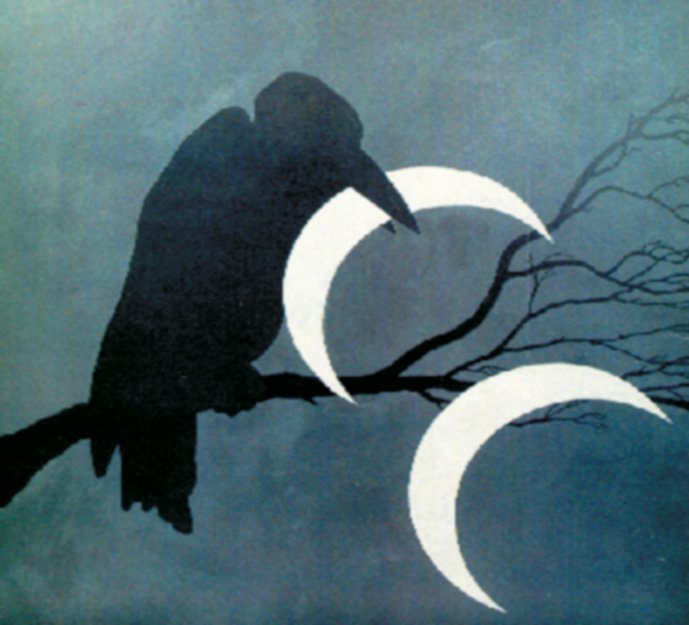 To sit on a bough is better than to hang on it like the next man, like Judas on the aspen, like Wotan on Yggdrasil. Let it even provide one with knowledge of thaumaturgic poetry or make a brick of historical masonry everlasting. So who sits on the bough? A writhing fluffy monkey, Humpty-Dumpty (on the bough), XyZ (same place), Boddhidharma engaged in more habitual pursuit, nightingale staring at rose, a crow...

Well, be it a crow. Hardly the two Nordic ravens, or the one and lonely Arctic one who rises on a great elevation, dodgy swal­lowing redundant suns. ‘Tis rather one of those jackdaws that, as I heard, each summer appear in Moscow, and set off to Paris in winter, – or the other way round?

To sit on a bough is discomfort. You may fall down, you may chop it under yourself, wind may blow you away: 'em coverts bristle up somehow. A trapper may shoot you in the eye, or you drop into ever insatiate wolves' jaws. Or else a sly fox, or a musky cat may twiddle you dead.

Maybe a jackdaw. However never mind. From afar, from that afar crows and ravens in hazy light look as black as a bough.

Even no jaws down there, anyway you’ll let fall, – the air's such a temptation! – what you held in your bill, that natal, native country, a tail, a head, a chunk of cheese, time, Leskov's merchant’s wife gazing at moon that looks into chamber, a dry slice of cheese, or dead jackdaw's giblets, or a throat of a kitten still alive, a buttery pancake or a grape.

So that surely all that'll end badly here in Russia, and so will it be everywhere. So let's not croak.

Jackdaws know how children are being born, so they croak. Don't croak.

Let's better look at waterfall or at apse. Or gaze at a hole in the kitchen's corner, or at anything else you may not like. Left! Horst Wessel is still not asleep in Kobenhavn! The wind blows in the air.

The air. Maybe one can put walls asunder? Or float a paper ship, or caw like a frog, buy a candle in church, and pick with finger in the corner at home, go to shower, change a dress? I don't know. Should think o’er sittin’ in a hazy chair.

WORLD IS FILLED WITH SOUNDS, some of them so pelucid that they're almost invisible

Lately there's found one amiable but stable cliché tendency in appraisal of Nikita Alexeev's work: he's named «the last Mohawk of romantic conceptualism, the custodian of values and testa­ments of Sturm und Drang epoch" (1), his participance in KD (2), and founding of APT-ART, being stressed and soon. Well, it would be a nonsense to deny his role in Moscow's artistic life in the 70-80ies, to consider him apart of the noma's collective body. At the same time these limitation frames savour of mothball smell of «museofication», or classification... Somehow the image comes to my mind, of an uncle from Paris, who has emigrated from «Bolshevist hell» just in time, and has lovingly preserved, there in Paris, testaments of «aristocratic» youth, and who now appeared before our imploring sight as a living remind of the golden, silver, bronze or you name it which age of Russian art. For some reasons it goes clean out of one's mind that even at that «blessed» time Nikita Alexeev has been very diverse; that, at first sight, it could have been rather difficult to naturally combine KD's philosophic esoterism, unruly jocular APTART, author's split consciousness and undoubtedly lyrical «conceptualist» poetry of his texts. Meanwhile, whimsical word jugglery of the latter rather distinctly formulates Nikita Alexeev's artistic method which integrity is based on permanent experimenting with concepts in «the ever unsuccessful pursuit for the sense» (3). The fact that the space, where judgment next in turn was placed, played an important role in combining of the concepts, slips from the interpreter's attention. And not just the space's form organizing parameters, but rather its metaphysical characteristics. The «appearance» of each exposition varies depends on the latter. That results in organic «penetration» into the showy field of KD's actions, and into the playground of APTART, successful adaptation of the Western exhibition spaces, of poetic albums, of theoretical discourses etc.

XL Gallery goes on in its work with the context; in this case we hope to destroy already foregone stereotype of Nikita Alexeev's artistic activities that circulates in Moscow art environment. Exhibiting of the «Two Moons» project, with its distinct social message, right after aesthetically cool exhibition in L Gallery («Weight and Tenderness»), is on principle for us considering the previous reasoning. Chilly and academic, and at the same time somehow overloaded with «conceptualist» mentality, the «L» space appeared a nostalgic medium, both for the artist and for the critics, that unwillingly provoked interpreters for suave reminiscences of «romantic conceptualism», «museum» signifi­cance of the «custodian of testaments» etc. That haven't come into the artist's intention, who familiarized metaphysical field of the developed space, with flexibility. Indubitable «tenderness» of graphic works and distinct «weight» of the objects suspended in noma style, in combination with rigid minimalism of the «Two Moons» painted diptych, that puts walls of the «experimental» «XL» space asunder, – may these be reasons for hope that «Rock-n-roll's dead and I'm still alive»?