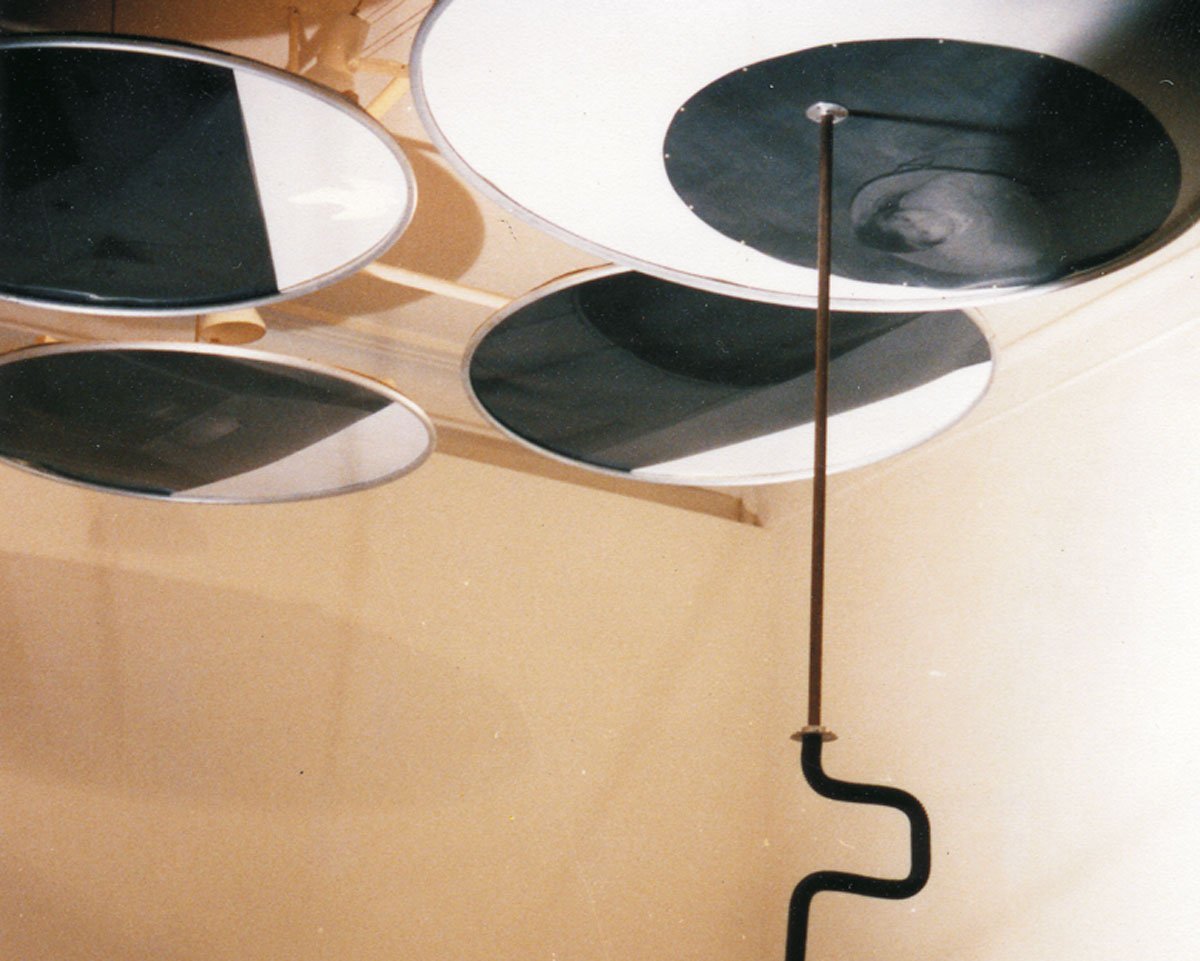 An orbit assumes existence of the center. Encircling the orbits is placing landmarks on the way to the center, and also a danger to hang on some trajectory. "Remember of the main!" Naivity and phantasm pick us from the next orbit, in the expansion toward the center.

Passion and faith have been the driving force of scientific theories, trying to open up new worlds. Wooden instruments of these theories combine in themselves warmth and insanity. For me, a thrive to fantastic jumps is more attractive than continuous movement at the territory of pragmatic research.

As I consider my projects, creation of autonomous constructions means an attempt to model a global mechanism. And the will to do it immediately forces to construct models from the details that are available here and now.

The specific feature of Vadim Fishkin's poetics is its indifference to the problems of language. Language for him has never been a valuable object of research as such, but just an instrument that meets demands of informational capacity, communicative effectiveness and easiness in use. In other words Fishkin's poetics has never treated phenomenon of art as an absolute but was on the contrary interested in everything beyond art's border. The object that Fishkin studies is the phenomenon of being; he tries to recover the ontological status of artistic work.

Fishkin reconstitutes ontology through appeal to elementary, pure and archetypal constructive acts. Constructiveness appears to be possible by means of total reduction of tradition and reflective allusions, i.e. it becomes possible only as reconstitution of the act of transformation. So Vadim Fishkin's new ontology comes as a new artlessness, his art - as a new handicraft, and he himself with all his machinery as a new Kulibin. As any result of initial deed, his works are self-valuable, self-circuited and are perceived only from their inner nature. Therefore another specific feature of this poetics is its total indifference to the problems of context.

Reconstitution of ontology also happens trough appeal to constructive procedures; every Fishkin's work is a model of the universe, machine mundi being a prototype of his machines. His appeal to constructiveness and machinery is positive; procedures of machine work make apparent the processes of settling of the Universe not it's disintegration. Fishkin's poetics is far from cultivation of tautology, graphomania or schizoideness. So one more feature of his poetics is overcoming the deconstruction strategy and making reconstruction strategy actual.

Combination of precepts for primary status and constructiveness expose a thrive of Fishkin 's poetics for the status of absoluteness and universality. The world of his works, combining fragments of traditional cultures with normative archetypality, give out claims for post-historical classicism. Finally, combination of totality with positiveness applies Utopian perspective to this poetics. So Fishkin's machinery aspires to genetic link with Tatlin's tower of the Third International.

Two distinctive features of the Fishkin's constructive poetics define its difference from poetics of historical constructivism. The first one considers a method of revelation of aesthetic convention: the Utopian universe appears as banalized and likened to bugles kaleidoscope. The aim is not to reduce fervor but to just define the borders of statement, he deals here with locking Utopia in the aesthetic sphere. The second feature assumes breaking of the unity of poetical organism, in one of its elements: there emerges a gap in the Utopian universe, and through that gap other worlds and other Utopias yawn. Once more the aim is not to reduce fervor but to acknowledge limitation of the statement. In the other words, having not lapsed into anti-Utopia, Vadim Fishkin admits existence of the other Utopian dimensions as legitimate.

To the extent of Fishkin's poetic appeal to the acts of initial creation, from one side, and to the post-historic condition, from the other, the sphere of its realisation is an eternal present. Then, appealing to the constructive acts, his poetics doesn't accept mythologems of the eternal return of the similar, but assumes positive developing of this permanent actuality. And finally, as his poetics has an attribute of Utopian perspective, so perspective of the future is immanent to this eternal present; the future not coming soon, but distant. Naturally, this future should be beautiful or otherwise it may not be at all.