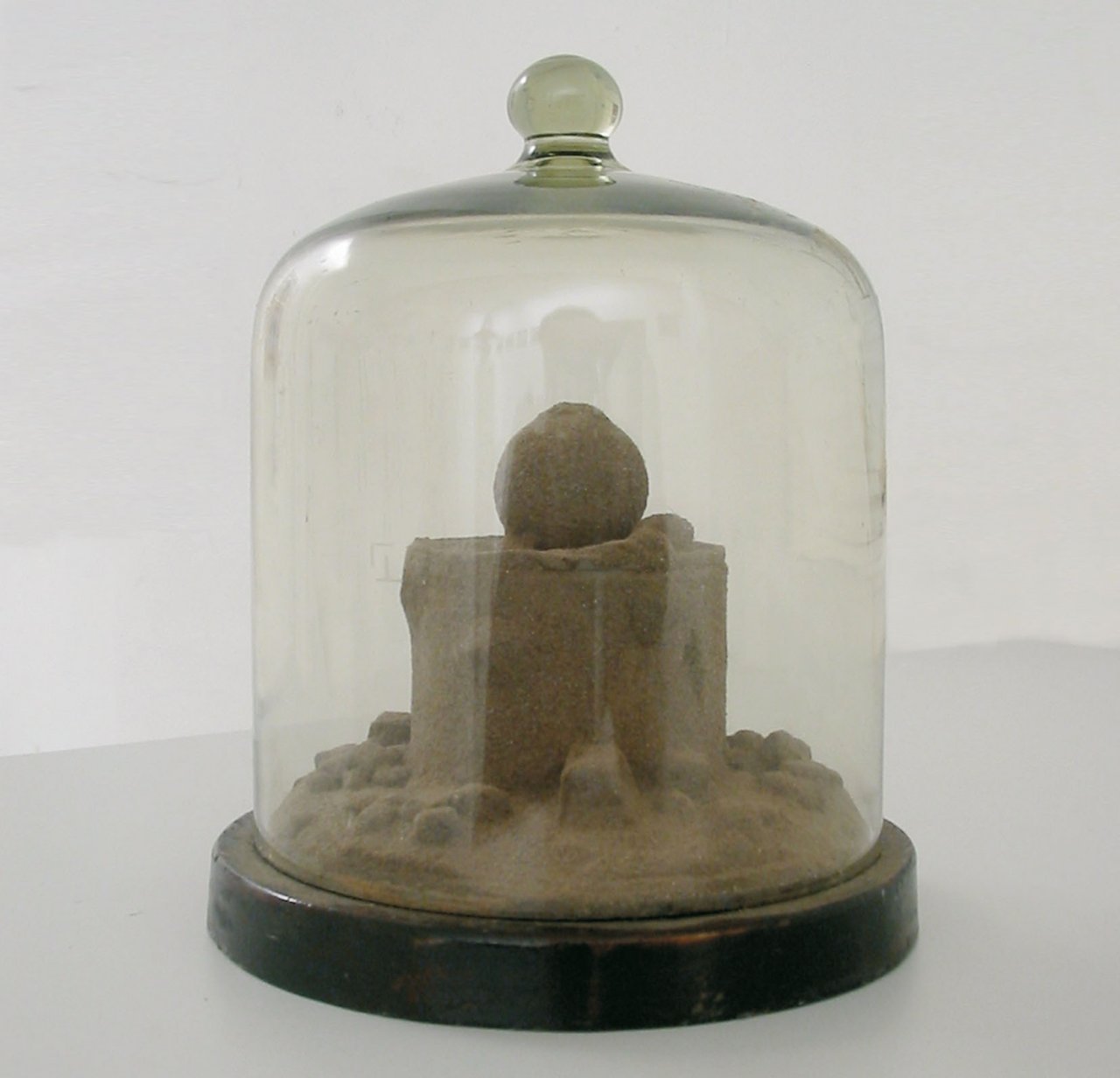 Even layers of dust carefully preserved for many months
Alfred Jarry

«... the day brought him new impressions. Seceding in memory they have diminished in size like a railway platform as seen from a window of departing train.

Their images have partly rubbed away at times, and then they looked like archaic cult buildings or minimalistic sculptures made in bonsai technique. Being covered with gentle and fluffy veil of dust they have almost lost their initial appearance unless someone's solicitous hand sheltered them with bell-glasses.»

The Book of Dust

Sergei Volkov's Dusty Models is a single project allocated in time and space, its first part being exhibited in Aidan Gallery, and the second one in XL Gallery. The first part includes small sculpture covered with bell-glasses. Cor­related to the author's existential experience, they are sharp shaped even despite of dust layer. Elegant and self-sufficient, they seem to need no wordy interpretations, as their toy merchandability provokes personal reminiscences. XL Gallery shows the objects in the state of their rise; «an impression seceded in memory» is fixated in unsteady shapes of ideoforms. The exhibition's idea lays in between the sign and the ideoform. This space is hard to discourse of, but is distinct for perception. The two-part exhibition, that assumes a story, is, on the contrary, the universal formula including both A and В points, and what's significant, also a space and time segment between these points (or, to be more correct, the mentally surmounted field between an occasional impression or personally important recollection and the artistic result). The two-part exhibition could thus be defined as a model of displacing the image from unconscious to the gallery space.

Sergei Volkov occupies specific place in Moscow art scene. Hardly he could be referred to any particular context. His friendly relations with noma don't affect his work much. His ability to place a developed discourse into here and now formula is rather due to his genetic relations to the world art practice. The Dusty Models contain a distinctive remark at Dust Raising by Duchamp-Manray, and start a coded dialogue with Jeff Koons' sterile Protestant paradise. Dust on a glass is part of Duchamp's work named The Bride Stripped Bare by Her Bachelors, Even made in 1915-1923. Being a form-bound in Duchamp's intention, it turns into fantastic lunar scenery on the 1922 photo by Man Ray. The man-made «purity» of contemporary American and European instal­lations supposes absence of dust, so the latter gains features of some cultural mythologem «displaced» to subconsciousness. A «modernist» dust carried out to the exhibition title is considered, beneath the bell-glass, as archaeological culture layer that precipitates on individual artistic consciousness. Here comes a clear opposition of sterile and rational Western culture model to intuitively irrational Eastern one that easily includes elements of the counter cultures into its metaphysical body. Thus Dusty Models not only mark the personal sign system but rather signify the baroque archaeological orientation of the local art phenomenon.