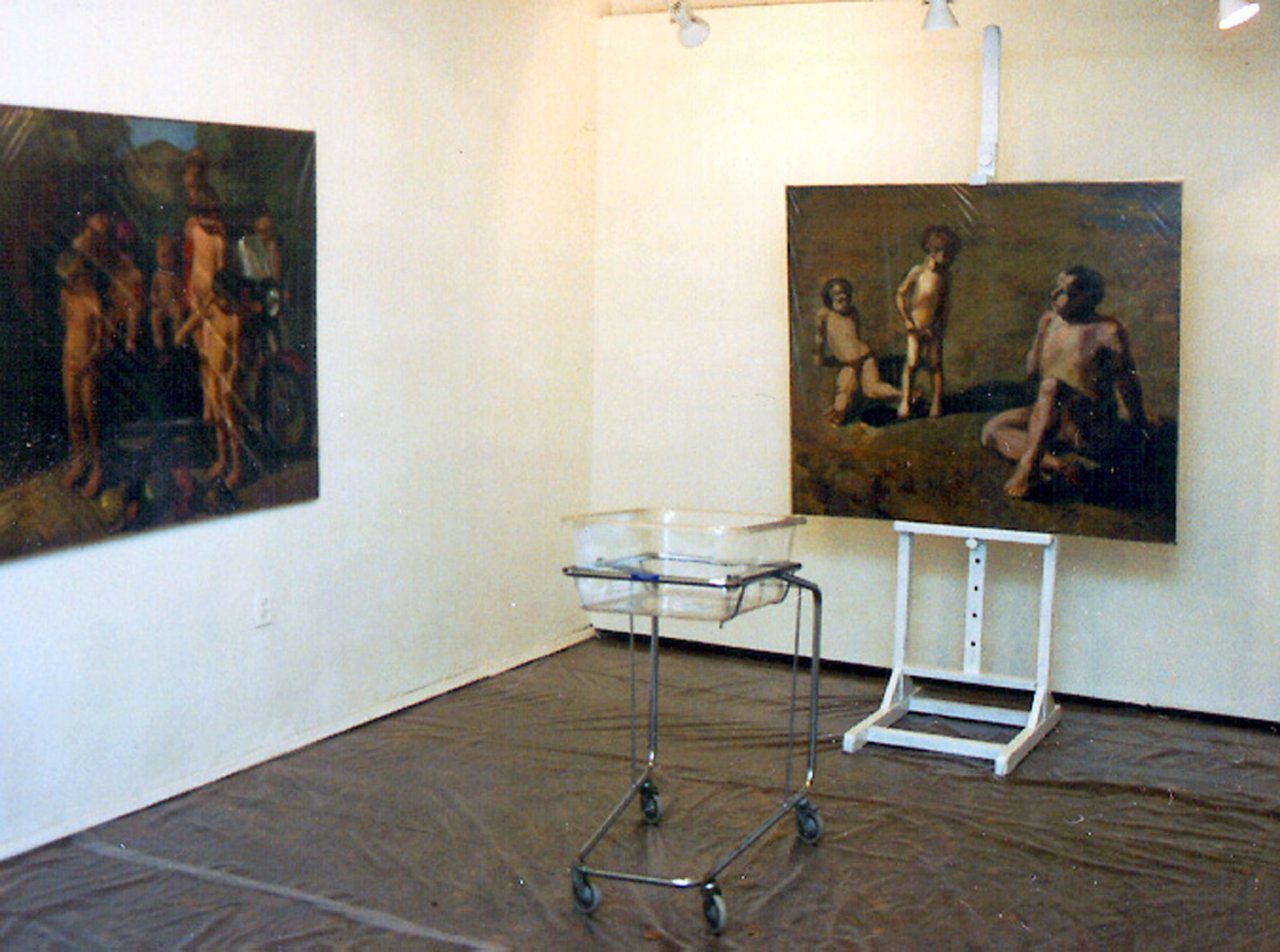 Much has been written about birth trauma, which is the core of unconscious and psychic in general. All man's life and activities are just overcoming and repression of this trauma, in various ways. To my mind, speaking of birth, one should note two traumas, as birth, beyond psycho-physiological experience, becomes the first total collision with social life.

One could imagine this state of shock, if he finds himself on another planet after narcosis. Shocked and unable to join (he game, a man is been inflicted by its rules. A maternity hospital is the first social institution in our life where we play the first social role of a child. All of us have gone through this situation, that anyway remained in our unconscious. The transformed traumas are shown afterwards.

The exhibition was intended to be a symbolic attempt of neutralization of neurosis through suggestion to realize possible alternative scenarios. Today's infants are the future society. Thus, until it's not too late, I feel necessity to perform this action here and now, just in maternity ward.

Modern social concepts of personality, freedom, family, social ideal and so on, are components of the repressive culture, where socializing goes acutely painful. Phrases about cosy happy childhood sound as falsity and hypocrisy. In fact childhood has the status of marginal group or a minority. The situation of permanent maternity hospital is typical for all social institutions, where a human being's personality is ignored.

The project aims to prompt society to revision of values and reconsideration of its attitude towards person. In contemporary situation this is the primary task for art, as solving it without destruction of conservative ideology of power/submission, — seems practically impossible.

The shocking subjects of my paintings are for overcoming of infantile phobia and problems, depression, humiliation and absolute dependence; they also give an answer to traditional culture which maintains indisputable standards and forms social conformist character ("...individuals are basically subjects of power rather than mere objects of its application" — Foucault). The further fate of individual and society will be defined depending on how these problems be solved.

Hey, Kids, go kick you dad and mam as if you were Jean-Claude Van Damme!

The exhibition practice in Moscow seems now to shift from discoursive and installation mentality to the active intrusion into social spheres; that could be a possible new trend of local art process. Esoteric and encoded art is opposed by involvement of reality into exhibition, by plastic driven with rhetoric, by the language of manifesto. The growing tendency is specified with inclination to radical gestures, exalted emotions (including morally charged pathos) and reference to unexpected themes. Emerging of such alternative is determined with the logics of art history, where aesthetic abstraction or speculation at times have been replaced with emotion or destructive energetics. Moscow conceptualism was dealing with social phenomena as with aesthetic and mythological category, distractedly and ironically. The new tendency's characteristic features are rigid straightforwardness, passion and shock. Irony is been replaced with pathos, discoursive speculations — with manifesto. But we also can't but consider the international context which naturally infiltrates into Moscow art in direct and radical ways.

The "Happy Childhood" project by Lyudmila Gorlova, who herself is bent for the new art tendency, includes partial display of the exhibit in a maternity ward — as a gesture of support for the newborn babies and .a means of lessening the birth trauma. The shocking subjects of her paintings (like children's unconscious rebellion against parents and society) are derivative of the artist's aspiration to overcome the inevitable frustration of the little ones. During the action mothers at maternity ward receive postcards with rhetoric questions that should provoke thoughts about their responsibility for children. Video-taped action is then used as a component of the exhibition.

The "Happy Childhood" project is important for XL Gallery as an interesting variant of the aforementioned tendency and a reference to the new theme. Moscow exhibition practice haven't shown example of study of child phobias and frustration especially in such a concentrated form. The action in maternity ward, as part of the exhibit, is interesting because it is an emotionally driven radical gesture which deepens the exposition's meaning; it is also an attempt of seamlessly getting together traditional realistic painting, video and socially aimed action. Lyudmila Gorlova's references to the problems of body and collective unconscious attract the gallery's attention in terms of both contemporary art context and relation to the local tradition.

...Keep out of reach of children

"Happiness is when you are been understood"
"Live Till Monday", movie

"You should pet children, and they'll grow real rogues"
Radio-play for children

«I don't understand» — this phrase, depending on the punctuation, expresses wide range of emotions, interest, doubt, amazement, fear, despair, protest, aggressiveness and so on, felt when we face reality. Any of the named emotions could be a motive for a purposeful action in-between the imperatives of «understand» and «terminate the incomprehensible».

This question-exclamation haunts us since early childhood, as soon as we get into social life confronting its envoys (parents, doctors, nurses etc.) in a direct dialogue/communication. It's needless to mention the stresses caused by «failure to understand» and overcoming it, or by the process of socialization. Many works are devoted to this subject.

However it's interesting that the theme of «childhood» as a definite state of mind, seems to be out of contemporary Russian art's view. Those works of art by the late generation of Moscow conceptualism, that somehow deal with thematisation of «childish», rather tend to be an inversion of the visual experience of childhood than analysis or attempts of emotional reproduction. These works could be divided into two major categories.

The first (represented by «Medical Hermeneutics» group and artists of their circle) gives a kind of imitated infantile/senile mentality: graphics, objects and installations appear to be a projection oi distracted «omniscient» look of little old kids. Such a schizoanalytic position with its «non-authenticity» and «autism» (a «Teddy syndrome») hardly has any reference to our theme, as it poses an artist beyond social problems. The second type (to which we could attribute activities of the «Mukhomor», «Champions of the World», and today's «Nezesudik» groups) is an example of aestheticised version of juvenile nihilism, that results in either humble recognition of the social convention, or pathological sociality of outsiders. As a rule «teenageness» is expressed in some programmed opposition — aesthetic, if the dominant style is opposed with renewed artistic language, or ideological, as in case of «Nezesudik» artists who declare their hostile position toward the dominant discourse with mainly discoursive means, like manifesto, statements and other texts. In any case "ideological" revolt against established laws of aesthetic order is also a manifestation of the explicit juvenile 'unwillingness to understand'...

Under such consideration, Lyudmila Gorlova’s project «Happy Childhood» is twice as much «childish» — at both theme and way of expression. By placing kids in the center of series of paintings and by addressing the exposition primarily to kids (as part of the project is performed in maternity ward), the artist violates aesthetic taboo established in Moscow «higher» art that assumes open sociality of the art gesture as mauvais ton. It's not the public place chosen for demonstration that is «forbidden»; Moscow art history has examples of attempts to develop the socially labeled territories, like exhibitions in public bath, metro or prison. Although those actions were of rather speculative character, while irony even doubled the coquettish significant flirting of art with society, thus masking the hidden illusion (even if we accept that art is a kind of mystification anyway). Either prisoners or passengers were just a part of installation or performance. I our case we face the absolutely different art «sociality», which is probably the first study of direct manifested appeal to a definite social problem.

It's important to note that by thematisation of «childhood» as a social problem, Lyudmila Gorlova also touches its existential and psychological aspects. One shouldn't be odd to suppose any pragmatism of the «Happy Childhood» project (that is one of the main features of Western «social art»), as if it works out the social therapy models by means of art. Demonstrating paintings in maternity ward would hardly affect the fate of babies who stay there, or even their mother's consciousness. This symbolic gesture is only stressing Utopian character of any projects of social improvement, though it is a coded message to future generation; the subjects of paintings (which become a kind of «bad advice» encyclopedia) will give the future «little soldiers» instructions of resistance. 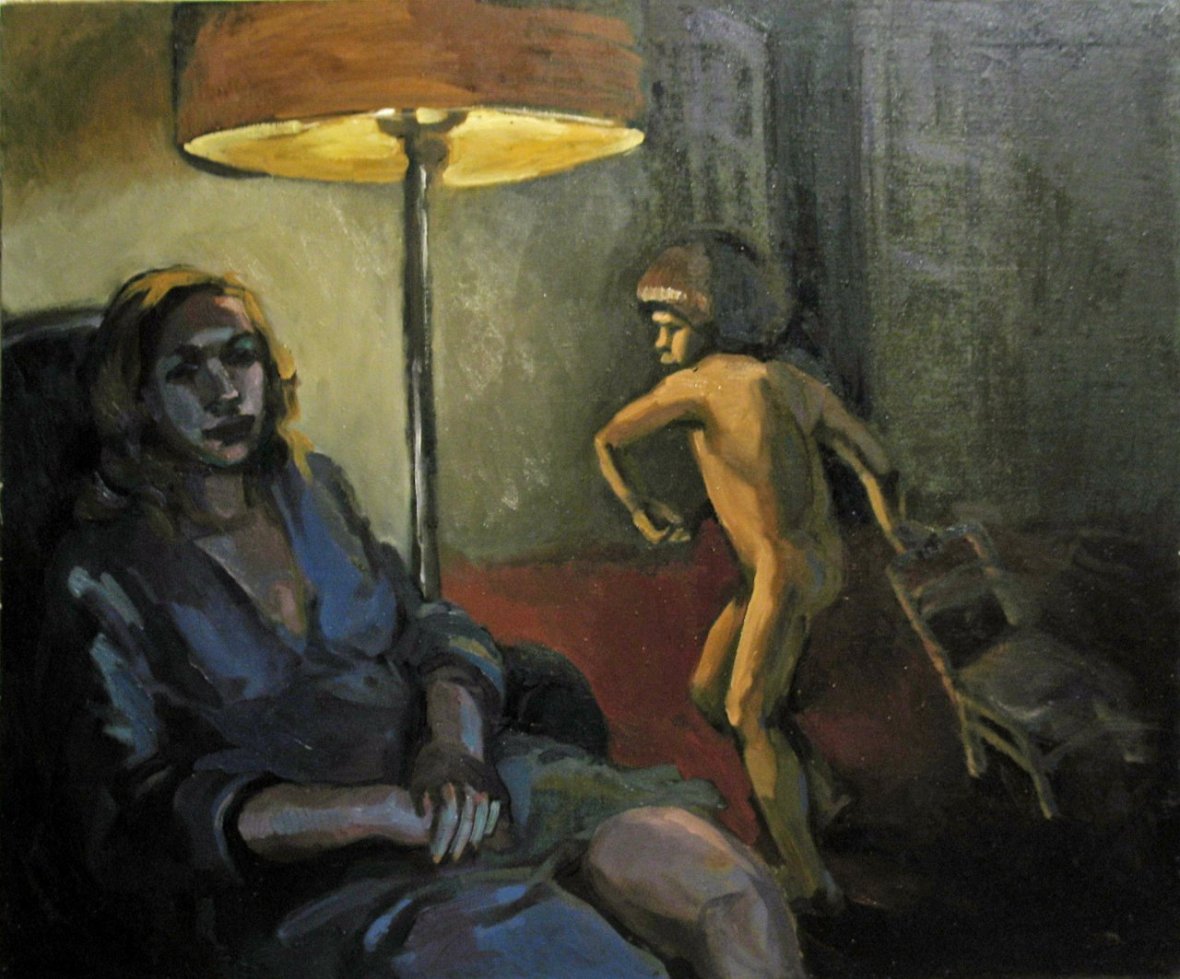 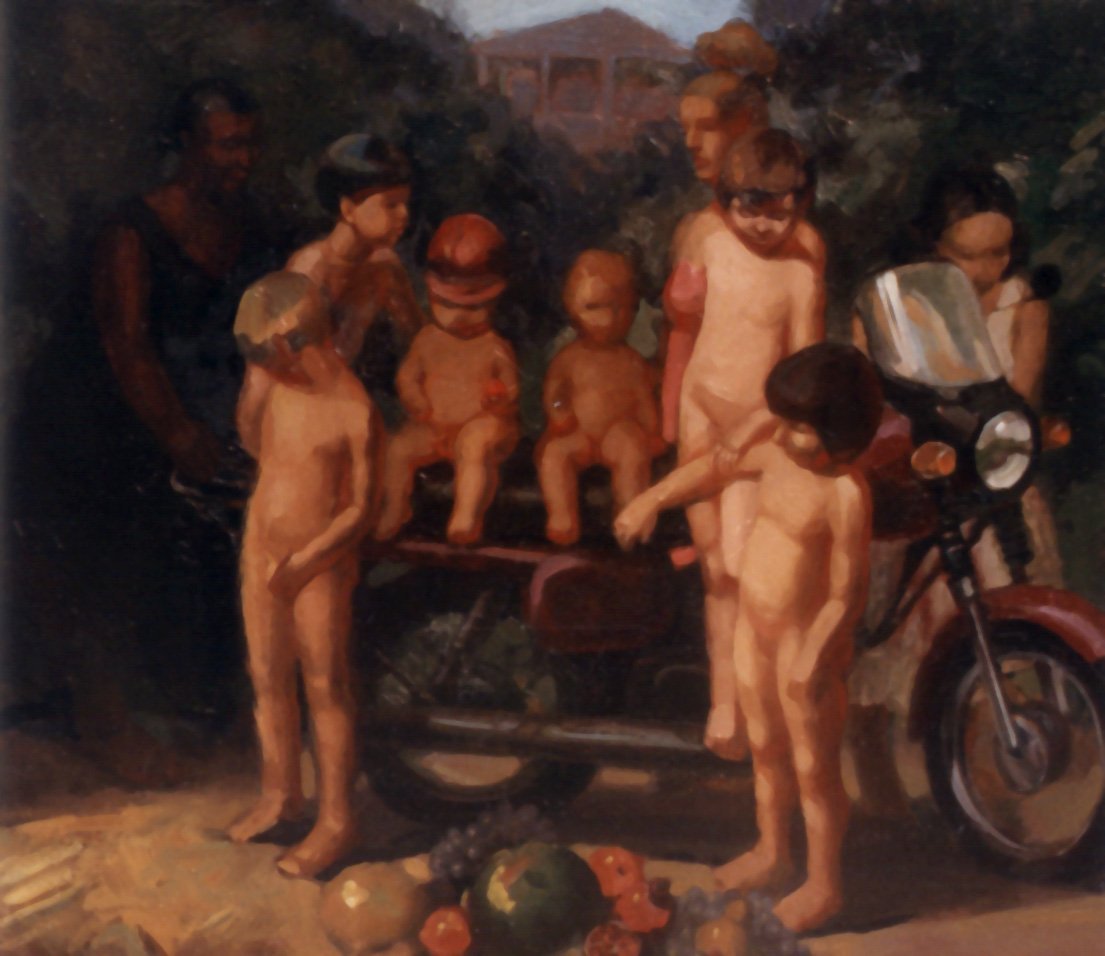